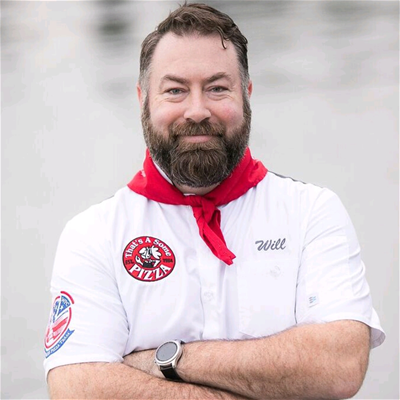 Will GrantOwner That’s A Some Pizza

Will Grant began his career at ripe old age of eight, working the kitchen in his family’s restaurant, That’s A Some Pizza, on Bainbridge Island, Washington. By 10, he was apprenticing under several different chefs and, into his late teens, he had helped to open 5 restaurants.
As a young man, he decided to strike out on his own, leaving the family business for the east coast to gain experience running kitchens at major chains, like Red Robin, Bertucci’s, and learning alongside some of the world’s best chefs, like Wolfgang Puck.
He eventually returned to his Pacific Northwest roots and That’s A Some Pizza, but this time as owner and head chef. Wanting to make the most of the restaurant’s 120-year-old sourdough starter, he attended the International School of Pizza in San Francisco, training alongside his idol, Tony Gemignani.
When he isn’t busy running the family business, Will spends time with his wife and young daughter and makes time to travel.

Do NOT follow this link or you will be banned from the site!
×